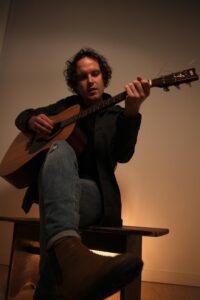 Kitchener born singer-songwriter Matthew Burkhart can’t recall a time where he wasn’t writing music. “I’m the only one in my family with a musical bone. I had to be making noise at all times and music has always helped me channel my streams of consciousness. It helps me tell the stories”.

Burkhart grew up in Kitchener, Ontario with both a mother and father who worked at a box company. In his youth, he sang for his local church congregation and at age 11 picked up his first acoustic guitar and began strumming soon after. While playing in bands and performing at virtually every small club throughout Southern Ontario’s “519” scene from 2007 to 2017, making the choice to write solo seemed like a necessity. Upon returning from a trip to Arizona in March 2020, Burkhart had a two-week quarantine to sit and write.

“The day after we arrived back in Toronto the borders closed. It gave me a chance to write and transpose my thoughts into melodies and structure. I had a lot on my mind after witnessing the breakout down there – it was incredibly liberating.” Always reaching further to expand as a writer, this fervent creative drive has never been clearer than on his latest 6-song offering “Slow Burn”.

Recorded in Kitchener at Mkondo Studios and produced by Brandon Fehderau, “Slow Burn” touches on a wide range of aspects – from finding new love in “Good Place to Start”, to pushing through life with your inner voice in “Back Down the Road”. The final track on the EP titled “Wind Song” is a social commentary divulging into the current political status quo and the economic ripples that occur.

“These songs are about finding the truth about how I feel right now. It’s never been easier to get dragged down by simply observing the world around us. The longer this goes on, the heavier the weight is on everyone”.

Slow Burn is both a journey and a seamless synergy between the music and words, drawing inspiration from classic Americana and Folk ballads with dashes of Alternative Country and Rock. It represents the decision Burkhart made to go write and record the EP in his hometown of Kitchener – to get in touch with his roots even for a couple weeks. With more rock-driven tracks like “A Place in My Mind” about the acknowledgment and removal from a toxic state of mind, it follows with the subtle and more melancholy “No Better Time Than Now” that accentuates the EP’s sonic range.

“The whole record was recorded in 3 days, with Brandon taking up rhythm section duties and me on guitar and vocals. It was incredible how smooth the whole process was, and I credit that to both Brandon and I being super prepared and working with intention”.